Queen Elizabeth National Park named after Her Royal Highness the Queen of England is Uganda’s most visited park. Located in the Western region of Uganda, the park spans over an estimated 1,978 square kilometres. The Park extends from Lake George in the North-eastern direction to Lake Edward in the South-west and also enfolds the Kazinga channel.

The Park is renowned for its wildlife and volcanic features which include volcanic cones, deep craters and crater lakes, among which is the Katwe craters from which salt is extracted. The wildlife in the park includes; hippos, cape buffalos, leopards, elephants, lions, crocodiles and chimpanzees. The Park is also a home to over 500 bird species and 95 mammal species. 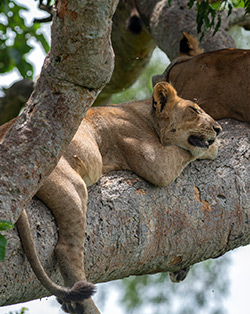 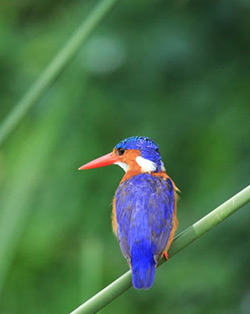 Queen Elizabeth National Park has a number of unique features that make it outstanding and echo it’s royalty, thus the park has numerous number of activities you could engage in while on a Uganda safari.

Queen Elizabeth National Park is the ideal place for an enjoyable game drive experience. The Park has an abundance of wildlife spread in its various regions; herds of elephants, hippos, warthogs, the rare sitatunga antelope species, waterbucks, topis and even the Uganda Kob. The thrilling nocturnal game drives will allow a chance to spot the prowling predators who are normally out in the dark seeking their prey. These predators include the tree climbing lions, leopards, venal cats, serval cats and civet cats.

2. Boat Cruise along the Kazinga channel

A thrilling boat cruise along the Kazinga channel will expose you to a massive number of hippos; over 5000 hippos are to be found in Queen Elizabeth. You will also see crocodiles, monitor lizards, and a great many water birds; some floating on the waters and others flying over.

Queen Elizabeth National Park is an unrivalled birding spot. With over 500 bird species, the park is the ideal choice for the birding enthusiast. The Park offers a safe haven to the innumerable bird species; it’s wetlands, Savannahs, thickets, and lowland forests is where the birds abide.

Chimpanzee trekking is one of the highlights of Queen Elizabeth. The endangered species are normally found in the Kyambura gorge – ‘the lost valley’ as defined by BBC. Kyambura gorge is a fascinating area, you cross rivers and meander through thick forests while descending the valley in search of one of the world’s most prized species. Wildlife, birds and brilliant plant life and flora will be spotted while on a gorilla trek.

The Ishasha region is somehow remote mainly because of the fewer number of visitors who venture out to this place. Though a bit strenuous, venturing out to Ishasha gives you a chance to spot its most eminent residents – the tree climbing lions. These are normally hanging in branches of huge tree while lustfully observing the herds of grazing antelopes and kobs. The region is also a home to elephants, buffalos and the rare Shoebill.